Making My Own Jumbos

Making my own Jumbo Machinder Toys

I've recently become quite enamored with the idea of making my own Jumbo Machinders. More than what we think of as a "Custom" (that's when you take an existing Shogun Warrior and modify it to either be more like it's more-detailed Popy cousin or use the basic available torsos, arms and legs to make new Jumbos by adding a custom head or other bits), I've been thinking of making my own JMs. I started thinking about this again after receiving some reproduction bits from Wesley Bourne (Bourno's Jumbo Works) and Derik Larson (Shogun Plastics) - the quality of the castings and materials were quite superior to what was available when I first started to think about making my own items. You can follow my exploit as they occur on John's Toys Facebook Page.

This has evolved over the years - initially the poly resins that were readily available were too fragile and difficult to work with - I had taken a foray into them about a dozen years ago and basically gave up on them - either the detail was too lacking or the output was so fragile a drop on the tabletop would cause a break or chip. The cast pieces were more like model kit plastics but brittle - also there's a constant fight against air pockets and surface bubbles requiring lots of clean up, filler and paint. To me, to make a JM I needed plastics that could hold up to handling during play (at least light play) which would require a resiliency like the blow molded polyethelenes and PVCs used today in large production. Also, I would want to be able to color the output so I didn't have to rely on the pain chipping or wearing off.

With the above in mind I started researching what was available and asking questions of those that are currently doing JM repro parts - I've also made a few friends along the way. So I ended up watching a lot of online tutorials and had come to a few conclusions:
So with the above in mind I started to first source the equipment, second prepare some space in my shop (which is setup for woodworking) and third, find sources of the materials (I had ordered directly from Smooth-On previously).

There are several articles on converting a Paint Pressure Pot from Harbor Freight into a casting pressure pot so I started with that. I waited until it went on sale and then used a 25% off coupon so ended up buying the unit for about $50 at the local Harbor Freight. Right now it's still sitting in the box - there are some mods that I need to do and I may add a heater to the bottom (this speeds up and improves the casting). I'm going to leave this for the most accurate part creation so I'm deferring it for now.

The second item I sourced was a vacuum chamber - there were several articles online about making your own from PVC, using it for both vacuum and pressure, but I deferred on this. I simply didn't want to risk the chance of a mess and really the cost of the pressure pot (above) and the vacuum kit I ended up buying wasn't too bad. Since I would have had to buy a vacuum pump anyway (something that can get to 29 bars of pressure), buying a kit that included the pot and bits was quite reasonable. My searches found this unit on eBay that works quite well for me. Here's a link to the seller - I bought the two gallon unit - I think in retrospect I should have bought the 3.7. Costs was less than $130. 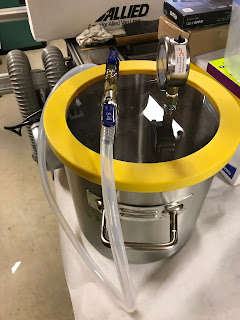 In the meanwhile I started sourcing plastics and defaulted to what I know - ordering a few items from Smooth-On (they were sample kits). I also began a dialog with others making parts that ended up as an hour-long conversation with Wesley Bourne who arguably is doing some of the finest JM reproduction work. I've also exchanged lots of instant messages with Rudy Albarran (Robo Werks Customs) who is producing some remarkable custom items. The conversations with these two have been invaluable in correcting some of my mistakes as I've progressed AND they've been awesome in recommending different plastics to try for different effects (harder, softer, etc). More on that later.

The third task was to find some space in my shop - it's a very cramped spaced setup for woodworking and in the beginning I cleared off my primary bench (behind a tablesaw) but ultimately cleared off my carving bench for sculpting and eventually for airbrushing. This ended up taking quite a bit of effort and time, to finally put back several items that have been overflowing on surfaces and reorganizing equipment so there's enough room. I drape plastic over surfaces to prevent too much dust from penetrating into the plastics and rubbers - but right now it's still too cramped and "trippy" so there's more work to do.

So once I got things setup and had both plastics (resin) and rubbers (silicone) to work with I decided to start experimenting. My friend John Vang had mentioned that there was a need for the LJN Commander Voltron Sword - this was something provided in the US version of GoLion but unavailable to the foreign market. Since I had one I figured this would make a good first test.

To do this type of casting you build up walls (they can be made of polymer-clay - this is clay that doesn't dry-out/harden and doesn't have sulfur in it like natural clay, which impedes the curing of platinum-activated silicone) and a foundation being careful of seams.

So I had intended to try the pressure pot on the sword but it's too big to fit in the pot, even standing up. Also, I had created the mold to be on-edge which I now thing is a mistake. I used a large syringe to force in the plastic - this was after my first mishap trying to first vacuum out any air - the resin kicked while in the pot so it activates much too fast. My second cast produced the sword above.I used a syringe to inject the resins which works well but with the short working time there were still air pockets along some edges. I talked things over a bit with Rudy and he suggested using a slower activated resin from Specialty Resin and Chemical (SRC) so I ordered some 12 minute working time. My next cast provided plenty of working time - maybe a bit too much.

I've also decided to relocate my fill any air holes and try this again with the mold flat. I also want the casting to be closer to the silver color of the original instead of the gray (options are light like you see or darker, but neither approximate the slightly silver plastic - to solve this I've ordered silver powder and will try it after I've modified the mold).

While experimenting with the sword I also began mold making of the two fists that came with a Popy Kamen Rider V3 figure - these would be reused for my custom figure. I also started molding a head for the figure using reference photos. The idea is to create a "blank" set of custom molds that could be slightly modified for several different figures - at least that's the idea. I would begin by copying the Kamen Rider figure but working down the chest padding so the figure would have more natural proportions - then adding bits for each custom figure). That's the theory anyway.

Sot he process is similar to what I did on the sword. I'm using Smooth-On Sorta Clear 40 which is a transparent silicone for mold making with a shore hardness of 40 (pretty stiff).


As you can see I ended up breaking part of the cast while trimming. I learned a few things with this attempt:

So I tried a second cast using only two coats and about half the resin and the results were better - but I got some discoloration - not sure if that's due to a lack of mixing of the pigment or what.


So at this point I decided to cast the second fist. With this I wanted to fix the missing-keys issue. I also had some different casting materials - this is Mold Star 16 Fast (30 minute cure time) - it's a bit softer but you don't have to wait hours to actually use the mold.

So that's where I am at this point. I've ordered more Silicone rubber to make casts as I'm down to about a quart (started with a gallon of the Sorta Clear 40). This time I'm trying the food grade platinum cure from SRC - it's much cheaper than the Sorta Clear and I think it'll work for most of the roto-casting I'll be doing. I've had good success with their slow-cure resin and have ordered a gallon of their 65D to see how it stands up to the Smooth-On version.

I've also begun sculpting the head - thus far the polymer clay isn't working for me. I may have to sculpt using sulfer-based clay and cast masters using Tin-Cured silicone. A bit of a pain but unless I can find a better medium that's what I'm thinking of doing. That's it for now - next article on Making My Own Jumbos will be on 3D Printing.