This website is dedicated to the Shogun Warriors - distributed by Mattel during the last 70's and early 90s and including precursor toys distributed in Japan by Bandai and subsidiaries (and copied by others). Unfortunately, I was too old (aka too "adult"... I was in High School and too "cool") to play with Shogun Warriors when they came out in the late 70s, but I remember vividly thinking that the fist-firing Godzilla in the toy commercials was way too cool and secretly coveted one. When I got older and wiser, I decided to start picking them up (this was all started by my girlfriend finding a Shogun Godzilla at a yard-sale for $3!). Fortunately they are still reasonable to collect (well, I guess these days that's a relative claim). 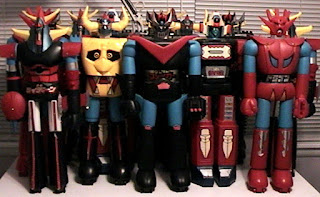 Until 2016 a sub-set of these pages were offered on my Wildtoys.com website - in 2016 I moved the pages with new updates and image to its own domain - shogunwarriors.org. For the most recent additions please refer to My Blog Posts.

In 1977 Mattel licensed from Popy of Japan (a Bandai subsidiary) several popular toys to be known as Shogun Warriors in the US. These were actually super-hero (aka Sentai) or giant robot (aka Jumbo Machinder) toys from manga and anime released in Japan in the early 70's by Popy. The Shogun Warriors were billed as "Invincible Guardians of World Freedom!" borrowed from giant robots that had their own series,originally in manga form (the Japanese version of our comic books), and then as anime (Japanese cartoons) on TV or in movies (very much part of Japan's popular modern culture). For more info on Shogun Warrior origins and the creator of human-driven giant robos (and probably the spiritual creator of what we think of as Shogun Warriors), read about Go Nagai.

Probably the most recognized of the Shogun Warrior and certainly the most representative of the US releases are the giant vinyl figures known as Jumbo Machinders. The Mattel releases included: Daimos, Dragun, Gaiking, Godzilla, Mazinga, Raydeen, and Rodan. Grendizer was added in Europe as Goldorak in France and Goldrake in Italy,  and further variations to packaging and figures followed.

Mattel released several different sizes of the smaller metal Shogun Warriors known as Chogokin in Japan. These smaller Shoguns are collected by both robot toy collectors and people who collect Japanese die-cast toys. These came in various sizes/price points and are loosely grouped as follows: 5 1/2 to 6" Two-in-Ones which transformed or had 2 different functions; Five-inch Action figures which came with various weapons and accessories; Collector's Shogun Warriors which were three to four inches in height and packaged in window boxes; and lastly a group of vehicles often referred to as Popynica, many of which came with firing parts/missiles or small figures. Being case in metal with plastic bits, these toys have quite a heft and seems befitting of a robot or vehicle.

There were six different 5 1/2" Two-in-One figures which were much like (and the predecessors of) the Transformers line that came out years later. These were Danguard, Daimos, Gaiking, Grandizer, Raydeen and Voltez V. There's also a Goldorak release in Europe only. Both because of their sophistication (making them more desirable) and because they came out toward the end of the toy line, these figures are extremely hard to find in original packaging and command much higher prices.

There were four different diecast 5" Shogun Warrior action figures: Dragun, Mazinga, Poseidon and Raider. Due to cost-cutting measures implemented by Mattel during the 70's, there exists two or three versions of each figure, each new version further simplifying the figure that came out before it (i.e. fewer weapons, features, fists and weapons becoming non-firing, missiles becoming "safer" and less general "play-ability").

There were 10 different Collectors Shogun Warriors: Combatra, Dragun, Gaiking, Grandizer, Great Mazinga, Poseidon, Dangard, Leopaldon, Voltes V and 17 (Daitetsujin 17 in Japan). These colorful die-cast shoguns featured metal bodies with plastic heads and limbs. Their only moving parts were the arms and hip joints. This line was also released as part of Bandai's GoDaiKin line a few years later so you'll find them as variations with extra stickers.

There were many Shogun vehicles released during the toys' run, usually in groups (reflected by the Assortment number). These Vehicles were borrowed from many different TV programs from Japan (the molds already existed so it was a matter of repackaging under the "Shogun" heading) so some are obviously not related to the recognizable Shogun Warrior figure toys.

I've placed the many Mattel licensed items and catalog ads in this portion of the Shogun Warrior segment. You'll find some odd-ball stuff here, much that you've probably never seen. I've also placed images of Japanese and European figures and accessories here.

All Mattel images and captions are copyright Mattel and used without permission. All other content, including images and editorial, is Copyright © 1997-2019 John Eaton and/or contributors unless otherwise stated. If there are any comments or objections, please contact John Eaton, by clicking here.
Share this: