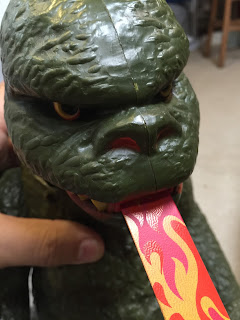 Although some would argue whether he is really a Shogun Warrior, the most recognizable of the entire Shogun Warriors lineup to Americans was the Godzilla provided by Mattel as the US had been inundated with Godzilla movies since the mid-50's. The US release of Godzilla was the shortest Shogun Warrior coming in at 19 1/2" while the other Shoguns were more in the 23" size; and he didn't come with any interesting projectiles or weapons. To make up for the shortcoming, Godzilla's fist fired off as a projectile! He also has a red lever protruding from the back of his head that extended a "tongue" of flames. Godzilla's arms and legs can be re-positioned, but his head was motionless (held on the body by visible screws). His feet has yellow claws screwed to their bottoms that contain wheels for scooting the King of Monsters across the floor (no shag carpet, please).


There were at least three releases of the Shogun Warrior Godzilla:

The first release was made with a much lighter and brighter green plastic, was painted (the eyes and mouth) very brightly, and had weights in the bottom of its legs. The yellow plastic claw/foot bottoms has a reinforced ring that inserts into holes in Godzilla's legs (the weights reside in these inserts) - this version also has "Japan" on the bottom while the later versions had "USA." Also, the tail has a tab that slips into a slot, presumably so it would line-up correctly to the body but at some point removed (I would think that this could cause the tail to crack if forced in an improper position). The head has hardly visible plugs hiding screws (to hold the two halves together) which were later simply glued to simplify the manufacturing process, I believe. Finally, the lever is molded in a bit darker red plastic (although this is difficult to identify without holding it against a later figure). There's one other variation - for some reason some of these came with a tail that's missing the fins (not sure if those are first-first issues or what. Of the first issue figures I have in original boxes, one has the smooth pickle while two others don't so presumably they are the first issue, first release). There's one other variations - some of the first issue have a smaller fist with a straight thumb - I posted about it here.

The second release was made from a darker green plastic and had no weights in its legs (with "USA" molded on the bottom instead of "Japan." The face paint was less garish and more subdued. There are no plugs covering screws - instead the figure has a stem-and-slot configuration that's glued together. Finally, the lever is a brighter red but as indicated above.

As a note, the Japanese release of Shogun Godzilla (produced by Popy as the Jumbosaurus Godzilla) had a speaker in its chest, with a pull string so you can make Godzilla bark! There is no lever or tongue-of-flame.

The third release was almost identical to the second, but Mattel got smart and reinforced the red lever after customer complaints of its snapping off. I don't believe a darker variation of the smooth pickle (tail) exists - presumably it was done smooth as a first-first then updated to the more common mold.

There are two different first issue boxes that I've seen - one for the US market and the other for the Canadian market - the latter includes text in French. Note that the box has an incorrect size of 20" in the text - later issue boxes have 19 1/2."
The box 1st Issue box reads:
There were slight changes made to the box between the first and second issue Godzilla, indicated by the printer's code: R6493> P643>9858 printed on the front and different text on the sides.The box also has a change on the front from "20 INCHES TALL!" to "19 1/2 INCHES TALL."

The box 2nd Issue box reads:
There is also a fairly rare dual-language Canadian box that has text both in English and French. I've only seen this variation in the first issue box so it may be that Godzilla only had the one release there.

Finally, there's a third version of the box that's usually dubbed the "bloody claw" box. It's been my contention that the printer just over-saturated the red screens as the entire box is more reddish in town. However if you look closely and compare the box to a regular box, there does appear to be extra pigment applied to the tips of the claws so there's an argument that it was done by intent and then later removed.

All Mattel images and captions are copyright Mattel and used without permission. All other content, including images and editorial, is Copyright © 1997-2019 John Eaton and/or contributors unless otherwise stated. If there are any comments or objections, please contact John Eaton, by clicking here.
Share this: