How to Start Collecting Shogun Warriors 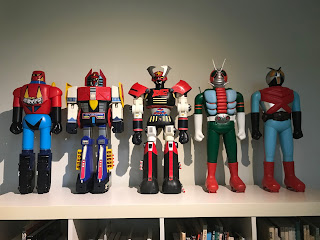 I've had a few newcomers to the hobby ask for some advice on how to start collecting Shogun Warriors toys, so I thought I would share my thoughts and have something to link back to - thus this post.

I think  the "why" should determine how you use my advice - let me explain. Most collectors don't start out with the idea that they are collectors - they either see something interesting and just buy it because of some memory (in the case of a vintage toy) or because they like the aesthetics of the thing. I break it down to the following:

So where to start? This is where you need to do a bit of soul searching and decide the following:
There's sort of a progression for most people - they don't think they're going to be at the "I'm going to own everything" stage until they start feeding the need - and yes hobby collecting can be quite addicting. I think most collectors start with the purchase of a few loose items and then, depending on availability and degree of OCD-ness, they progress up the ladder. The trick is to decide what you really, really want to do (if you're wishy-washy about this it can end up costing you lots of money - I'll explain later).

So what should you pay and where should you go? These are my recommendations:
For my own experience, I have always had a collector's personality - I'm rather a completest and it shows in my collections. If anything I have to refrain from over-buying. I found my first Shogun Warrior Godzilla at a  yard sale for $20 - it had a broken lever but came with the fist. Inside the tail I found a small Godzilla bendy that I still own. I bought it because I love Kaiju and Godzilla in particular - I actually thought the commercials for the Shogun Warrior were quite stupid when I saw them as a young adult - why would his fist fly off? My reasoning for collecting this toyline has more to do with the aesthetics and an appreciating for the original tokusatsu programming or anime.

One other note - about displaying these - I love the idea of having a whole wall covered in Jumbo Machinders - however I don't have the space plus it's difficult to keep that big a display well dusted. You could either put everything behind glass or do what I do and rotate out the figures from time to time in my office. The photo at the top is from a few months ago.

Anyway, I hope these tips will help new collectors. Let me know if you have any questions.
-- John


All Mattel images and captions are copyright Mattel, all Popy, Banpresto, Unifive or Yutaka images and captions are copyright Popy/Bandai and used without permission. All other content, including images and editorial, is Copyright © 1997-2018 John Eaton and/or contributors unless otherwise stated. If there are any comments or objections, please contact John Eaton, by clicking here.
Labels: Collecting, Shogun Warriors
Share this: