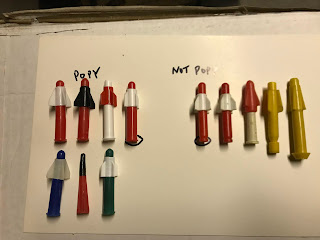 I often get requests to identify the various missiles and projectiles that accompanied the Shogun Warriors. Hopefully, this page will help to identify the multitude of variations.

Here are the Shogun Warrior missile variations that I personally possess: 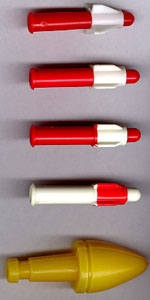 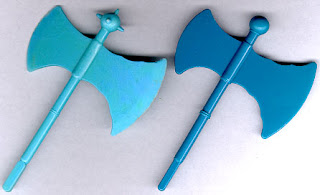 Dragun axes came in blue, white and yellow (usually one of each). The axe on the left is from a first issue Dragun (and is how they were made for the Japanese release). Notice the larger base and spiked head. 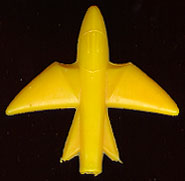 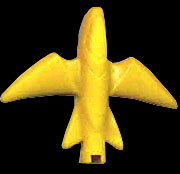 Notice that the first Issue (on left) is hollow, blow molded plastic while the second Issue (on right) is hard plastic, with a hollowed-out belly. The first issue has a hole in its tail to attach to the firing pin, while the second has a square notch. They are not interchangeable between the different Raydeens.

There are other missile variants:
And projectiles from the XX and ZZ accessories


All Mattel images and captions are copyright Mattel and used without permission. All other content, including images and editorial, is Copyright © 1997-2017 John Eaton and/or contributors unless otherwise stated. If there are any comments or objections, please contact John Eaton, by clicking here.
Share this: