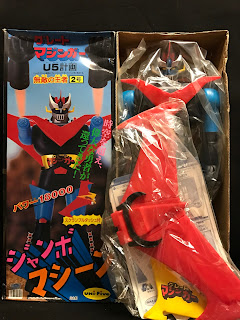 
When Unifive released their second jumbo machinder I basically refrained from purchasing. I already had several examples of Great Mazinger as Shogun Warriors and I could basically live with the shooting fist instead of the regular left fist. Also, with this release U5 went up a bit on the retail price to around $100-115 (if memory serves) and at the time I was still finding loose examples of the Mattel Mazinga for $20 and boxed versions for less than $100 - the value just wasn't there. I finally relented when Diamond Comics put these on close-out. I think I paid around $60 for this example, which is in a pretty beat up box. I'm not glad I went ahead and purchased it.

I shot a few photos comparing it to the 1st Mattel issue Mazinga so you can see some of the differences. Like the Mazinger Z released previous to this one, the proportions are dead-on.

For Great Mazinger, Unifive did a much better job reproducing the original torso sitcker with pretty much the exact same font.

The knees are also a fair approximation to the original release "split" knees rather than the later Mattel issue.

Finally and perhaps the most important - the Unifive Great Mazinger came with the Scramble Dash! This appears to have been molded after the original only the wings are fixed onto the backpack rather than is separate pieces (the original Popy version came in box that's rather small, that belies the overall size of the Dash). This is also the same Scramble Dash that was made recently as an aftermarket accessory that can still be ordered (you see it a lot in eBay auctions). This will fit the Popy issue but be careful as it's a tighter fit and it can rip the torso sticker - ask me how I know?