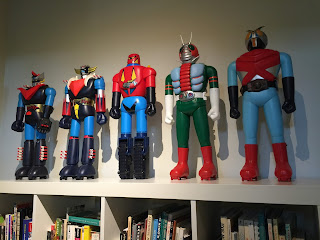 The first jumbo machinders were produced by Popy in the 70's - Popy was a subsidiary of Bandai that targeted licensed characters from Manga and Anime. The term "jumbo machinder' was trademarked by Popy but over time it's become the term for any large "shampoo bottle" (meaning the interior bits are hollow and roto-molded from PET - polyethylene terephthalate - a process also used to create figural shampoo bottles like the Soakies that were produces in the 60's and 70's - the plastic has a similar feel). With some exceptions the heads are molded in softer vinyl. Generally these guys are about 23 inches (60 cm) tall but there are exceptions, as well as some licensed and knock-off figures that are smaller and referenced as "mini-jumbos." With Popy's success other manufactures like Takatoku, Nakajima and Clover brought their own licensed characters into the jumbo-sized world and this trend, mostly in limited fashion, has extended into the present in big numbers (the Jumbo Megazords produced for the Power Rangers) and in limited numbers and distribution to the collector market (like the Funko/Super 7, Toynami and Mandarake jumbos). Most Americans were exposed to Popy jumbos via the Shogun Warriors - Mattel, in partnership with Popy distributed several characters in the US and Europe under that nom de plume.

I began researching and collecting the original Popy versions sometime in the early 2000s, acquiring a Mazinger Z with Scrander Jet and later a Kamen Rider X - some time later I purchased a second Kamen Rider X that was slightly different - this ended up being a Jugarama knock-off marketed as Aquaman, as you can see Popy's influence is wide-spread.

The first jumbo produced by Popy was of Go Nagai's Mazinger Z - this was in 1972. What followed was an ebb-and-flow of character production extending into 1981 with the Giant Robot Factory concept - these later jumbo's came disassembled and it was up to the owner to assemble his robot. Popy also changed the lines name a few times - from Jumbo Machinder to Jumbo Machinder Deluxe, to Giant Robot Factory and finally Super Jumbo Machinders right at the end. There were also a series of Kikaiju (mecha-monsters) that were made of a softer vinyl that could be used as villains (aka bad guys) so the jumbos would have someone to fight - these were released in very small numbers so are the rarest items to collect. I believe this is the general order of release (if anyone can provide any additional details or information, please let me know). I've included the Bandai releases as the Popy brand has been absorbed into the parent. I've linked pages to my collection to those I own.

Kikaiju (aka the bad guys)

Note that in most instances the Mattel versions of the Popy toys had firing weapons added or were greatly modified to simplify the basic toy - the most obvious mods are to Gaiking, Daimos and Godzilla).