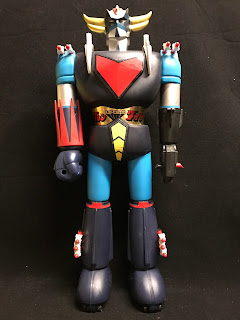 Unreleased in the US, Goldorak (also Grendizer or Grandizer) is more than likely the rarest of the Mattel Shogun Warriors released outside Japan. This Shogun is usually seen in a European, French or Italian (as Goldrake) version box and comes with cool accessories: His hand fires rockets (same hand as Great Mazinga) and he carries a double headed, sickle-shaped axe (it comes apart and the pieces are stored in his shoulders) called "Hakken" or "Harken". The molding on this figure is very colorful and true to the Japanese depiction. This Shogun demands ridiculous amounts of money at auction in the US. There appears to be four or five versions of Goldorak.

Version One is the Japanese Popy-released first version (Called "UFO Grendizer" in translation). It came with 2 fists rather than the 3-missile firing fist (the same missile firing fist came with Mazinga). The right fist fired off via a button below the shoulder. The chest "v" is a separate red plastic piece, as are the red knee pads and girdle below the waist. Red decals adorn foot spikes (on the tops of the feet), and the crotch arrows are painted yellow in molded plastic. He came with 14 triangular-vaned missiles and two very defined, 2-iece white plastic shoulder scythes (Hakken) that would fit together to make the combined weapon. This version came to the US via Asian grocery stores and is very rare. As far as I know, this is the only version to be sold at retail in the US.

Version Two is the first version released by Mattel in Europe - this was issued in Italy as Goldrake and as Goldorak in France and from the copyright date circa 1978. Both versions were manufactured by Mattel in Italy and issued with two different labeled boxes with the same stock number and translated in English, German, French and Italian. For some reason the Goldrake box seems much rarer than the Goldorak box, at least from my experience. The sides are notated that the toy is "MADE AND PRINTED IN ITALY." The toy is essentially the same for both Goldrake and Goldorak box variations. This version has a red decal replacing the chest "v" and knee pads. The neck looses the ring attaching the head to the torso...the neck now fits loosely directly into a hole at the top of the torso. The yellow, molded crotch arrows are replaced by a decal. The scythes are simplified to a more ridged "t" shaped channel plastic, each molded as a single Hakkan instead of the two-piece Popy design).This version has only three missile banks on each leg and feet that have been simplified from the original Popy version. Also, the left fist has been replaced by the 3-missile shooter, same as with Mazinga.

Version Three came out in 1979 and was produced by a German factory for Mattel - this version is about a half-inch taller (1cm) so 61cm rather than 60.5cm and has Made in Allemagne embossed upside-down on the back instead of the typical Japanese copyrights. Otherwise the figure is the same - I'm not sure about the box but assume it also has Made in Germany or Made in Allemagne on one end (I haven't physically seen one)

Version Four came out in 1980 for the cheese company "La Vache Qui Rit" and this is printed on the chest sticker. This version was produced for a contest and limited to 500 - sometimes good examples come with an extra small certificate with the numbering (although the number shows can show a number greater than 500, I've been assured that the limitation was indeed 500). The back (from photos that I've seen) has the typical Japanese copyrights and the box, which I believe is the same as Version Two above, has "La conformite du present produit aux normes francaises obligatoires est garantie par Mattel France S.A." printed on one end - the sides still have the same Made and Printed in Italy notations.

Version Five appeared in 1982 as sort of a continuation of Version Four - this version has "Made in France" embossed on the back  but is only 58cm tall, so about an inch shorter than the most common Italian made version. The box has been redesigned to open from the end for the figure to slide out, rather than the typical clam shell and I believe is made of corrugated cardboard with a printed label that wraps the box (I haven't physically seen it but am describing from photographs). The box probably has the same "La conformite du present produit aux normes francaises obligatoires est garantie par Mattel France S.A." printed on one end.

(note version list revised 2019.06.14 based on notes from Christophe Raes)


Mattel No. 2658
No Batteries! No Electricity! Fully Assembled!
Axes and rockets not for use with all SHOGUN© Warriors.
This is repeated in German, French and Spanish
©Dynamic Production/Toei Doga 1978
Mattel S.p.A., Italy. MADE AND PRINTED IN ITALY. All Rights Reserved. SHOGUN is a US registered trademark of Mattel, Inc.

Comparisons with a Popy Grendizer:

Comparisons between the Goldorak and Goldrake box can be found on the Goldrake page.