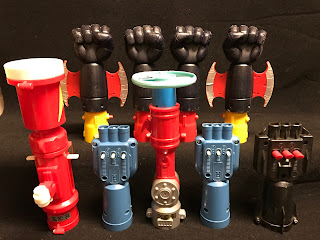 Many Shogun Warrior Collectors are unaware that the missile-firing hands of the jumbo-sized Mazinga, Great Mazinga and Goldorak were actually an accessory bought separately in Japan. I think it was easier to package the missile-firing hand than recast Mazinga without the missile holders on his shoulders and legs, or try to package missiles separately with the hand-accessory. Or it may be that while the figures are impressive, in market testing there just wasn't enough action to the Shogun Warriors so they decided to supply some extra bits. The shooting Axe-fist  (Iron Cutter) of Raydeen was also bought this way in Japan, but was thought of as an "added play value" feature for US consumers of the bow-fist.The star shooter was also a separately purchased accessory in Japan that came with a strap (as did the Mattel first issue Dragon) instead of the clip-into-slot of the later issue Dragun.

There were several different hands and accessories available for the Japanese market. They appear to originally be made for the jumbos Mazinger Z (XX-Series released with the post-Mazinger Z wave of No. 2850 figures) and Great Mazinger (ZZ-series), but were probably promoted for all/any jumbo machinders. The ZZ designation may be for "deluxe" versions (there really doesn't appear to be a distinction other than the XX having been released the previous year - both sets of XX and ZZ were still available on Japanese toy shelves when the ZZ fists were shown in toy commercials). Some of the fists take batteries or otherwise have some added play-value. Most of those pictured and described here were all made by Popy and are taken from the sides of an original Japanese issue Raydeen box, as well as a few pics of accessory boxes in my possession. I've also included those made by Unifive - it's unclear if accessories were made by other manufacturers.  I'll try to describe them the best that I can, but my knowledge is limited. Some of the information, corrections and all of the translations were provided by Matt Alt. Thanks Matt! Any new information is welcome...

The reason "photon" keeps coming up in the names is because Mazinger Z was built and maintained by the Photon Energy Research Institute (or something like that). Each of those weapons was designed to destroy a specific enemy -- that was the way the show worked, if you haven't seen it. Mazinger Z would encounter an enemy, get his ass kicked, and then the Photon Institute guys would come up with some new super-weapon to enable Mazinger Z (and later Great Mazinger) to destroy the bad guy. That was the general formula, anyway. (Info from Matt Alt... Thanks, Matt!)

Note that the accessories I own link to a page with additional photos in the Accessory Title; or you can click the thumbnail of the box lid graphic from my Popy Brave Raideen.