or "what the heck is this stuff?) 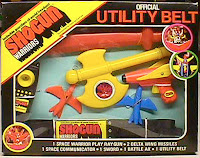 I'm not too sure about what company had the license to produce this cool role-play set. I believe that it was made by HG Toys (who made a lot of Mattel's licensed products that were collateral to the toy line...puzzles and the like). The set features cool hand-held items for children to act out scenarios featuring their favorite Shogun Warriors. Included are: Mazinga's sword, Dragun's axe, Raydeen's Delta Wings, a Space Communicator, a Space Warrior Ray Gun and a belt with Shogun Warrior's belt-buckle to hang the stuff from. Pics are from a set that appeared on eBay.

A pretty goofy small child's toy, the Rocket Top only qualifies as a Shogun Warrior toy by name. I guess the figure is supposed to be a robot, which is inverted to release his head as a spinning top.

G & J produced this Mazinga Watch. I've never actually seen one, but the watch apparently has a 3-d molded Mazinga head that moves on the watch face. Info and close-up pic provided by Chris Hoffman. 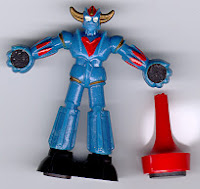 This small Goldorak toy has magnets in its hands and feet. By placing another magnet (in the red holder) under the table, one can make Goldorak "dance" or perform tricks. See box front, and see box back for instructions. 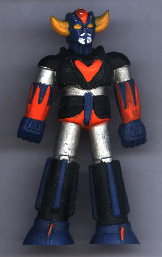 This little rubber figure has suction cups on the bottom of its feet (I guess to make it easier to stick him to your monitor!). A lot of this small rubber stuff is around, not released as Shogun Warrior toys but mostly as knock offs from China (pencil toppers, erasers, etc.).


All Mattel images and captions are copyright Mattel and used without permission. All other content, including images and editorial, is Copyright © 1997-2019 John Eaton and/or contributors unless otherwise stated. If there are any comments or objections, please contact John Eaton, by clicking here.