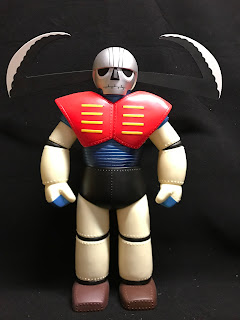 
For Unifive's fifth jumbo machinder release they decided to do something a bit different. Instead of going for another classic figure they went for a little-known Kikaiju (villain) and designed the Garada K7 from a small image, using the color-scheme on the second release Kikaiju box. The figure itself appears to be fairly well proportioned compared to the other Kikaiju, but in a move that was controversial, Unifive decided to scale the figure up a couple of inches. Around the same time a blurry color photograph was discovered with a different color scheme and thus the green-headed variant was born.

Note that the box above does not appear to be the same box - normally the "Previews" sticker in the lower right only appears on the Diamond Comic Distributors Previews edition (green head) - for some reason mine has it though (I ordered this from a collector in Japan so the figure is correct - I can only assume he accidentally swapped the boxes. The Japan-issue box has a small rectangular sticker where the Previews stickers on my resides). Otherwise I believe all the Unifive Garada boxes are the same (except for the stickers - there's an edition sticker added to the Black/Silver version).