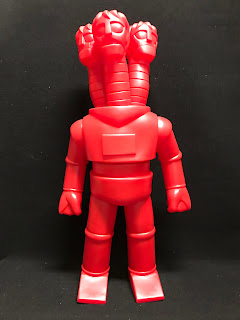 
This toy was originally advertised for 2016 by Medicom Toy but I'm unclear on the association. Kikaiju Rokuron Q9 was originally one of the "villain" toys produced by Popy for Mazinger Z to combat. Here we have a new mold with proportions similar to the original (the Popy version had two heads that could fire as missiles). Dragon Boy x Bear Model previously did a Dabulas M2 made in the same proportions, materials and retro box.

I believe that this version is the first made available - basically an unpainted prototype done in limited numbers molded in red. There are variations including the eventual release of the fully painted version. This thing comes in a big box - mine was partially crushed and I've been promised a replacement. The toy is made from think vinyl and has limited articulation. The box resembled the original first assortment of Popy releases - screen printed red and blue directly on corrugated cardboard.The toy is in a plastic bag with basically no padding (there is a piece of cardboard wrapped around the figure) in the box so it moves around a bit during shipping. There's also a small inserted slip - not sure what it says other than the "Made in Japan" in one corner and the toy's name in the opposing corner. 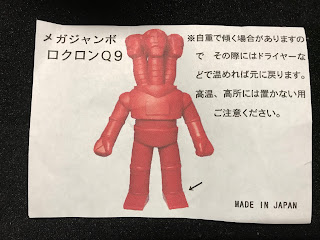