Rodan is the rarest (of what I consider are the US Shogun Warrior releases) and probably the most desirable and valuable of the Shogun Warriors (unreleased in Japan, many Japanese collectors search and buy up this great toy!). Billed as one of the "World's Greatest Monsters" and released in 1980, Rodan is collected by cross-genre toy collectors (aka monster and kaiju collectors as well as Shogun Warrior/Jumbo Machinder collectors), making it hard to acquire. I've included Rodan as it obviously is in the same scale as Godzilla and could fight all the Shoguns (making it the villain to the US line, I guess...this is suggested in the comic book ad). 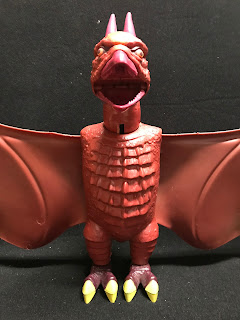 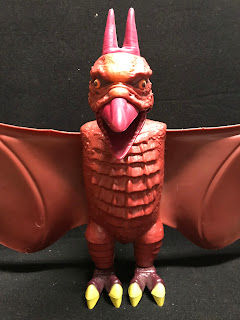 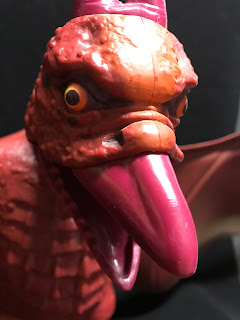 There are some paint variations in the figure (the stripe on his nose varies slightly in color and size). There are also some plastic variants - for instance, on the box it shows the beak and horns molded in the same dark plastic as the feet. I've owned three - the loose one above (dark horns and feet but you can find them with much darker reddish-brown bits) and the one boxed (dark feet only) with a second with the same configuration. I'm not sure if this was a running-change or what - if I were to guess, they probably started with horns, feet and beak the same color and then over time went to the current, lighter beak and horns as running changes. If you're a completest you'll want: 1) dark horns, beak and feet; 2) dark horns and feet; 3) dark beak and feet; 4) dark feet, all in boxes of course.

There are at least three box variations that I've seen: the first issue appears to have a misrepresented size of the wingspan at 41" on the box front. At some point Mattel applied a white sticker over the that text on the box. The box I currently own has the updated wingspan of 38" printed on the front. There's one other box I've heard about with the figure vertically pictured but I've never seen it - I think that's a myth; finally there's a box that has "bloody" claws, maybe, matching the Godzilla "bloody claws" box but I haven't seen it nor the photos of the same.

This figure commonly has torn wings - probably due to battles with other toys in the back yard but also due to the type of plastic - over time it becomes brittle and is more susceptible to tearing - I've heard of collectors that have had half the wing just fall off from Rodan displayed on a shelf as the wings are under strain. Also the open-close mechanism for the beak is often broken (the beak should "click" and hold it's position via ratcheting mechanism - those that are worn have their beaks open all the time giving Rodan a bit of a "slack-jawed yokel" appearance). His head is held on by a rubber-band-like stem that is frequently dry-rotted and broken. The wings attach with rubber bands (included with the figure but easily replaceable - they aren't anything special) under a removable back piece. Another problem area to look for when collecting Rodan - the tabs that hold the wings in the body (There are three holes in the back to make it easier to hold and by moving your arm up-and-down the figure flaps!) are often broken. The last thing to examine are the claws which are held with rubber bands which sometimes have broken clips (my perfect display Rodan had one of the claw tabs just break off - presumably due to the rubber-band tension on the now brittle-plastic so be careful!). Over time the plastic in the wings become brittle - my display which has been carefully wrapped for years developed a quarter inch crack, basically out-of-the-blue and with no stress on the wings. 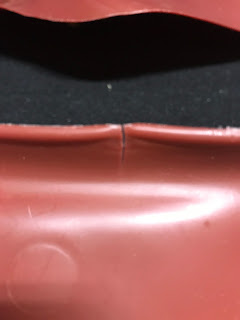 Recently I've seen a few of these sell in the $1000+ range as old-store-stock. The box should have an insert and instructions. 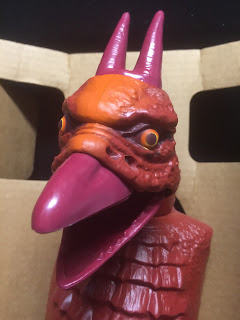 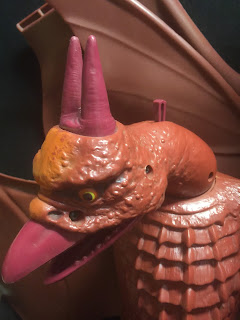 At some point I'll capture the instructions and post them - I'm not sure if I've ever seen another set in the wild so consider those instructions rare.