Monogram released six kits in conjunction with the Shogun Warriors release in the US: Dragun, Raydeen and Mazinga as a first release, then Grendizer, Gaiking and Raider (Getter Robo 2) as a second.. These kits were from existing Japanese molds (evident in the choice of plastic colors...all these kits came in at least 2 different colored plastics so painting was unnecessary). I think the black banner across the Mazinga, Raydeen and Dragun boxes indicate a closer tie-in with the first release Mattel figures. The boxes for Raider, Gaiking and Grandizer have different graphics with brilliant backgrounds - maybe to show a bit of flash on the very competitive kit aisle at retail (yes, this used to exist).
The Monogram kits are interesting when compared with the original Japanese kits - most if not all of these had some motorized action - why the feet on Mazinga and Raider are so strangely shaped - they were designed to "walk" using small levers that would rotate around a cam. Click the box images below for more information on each kit. 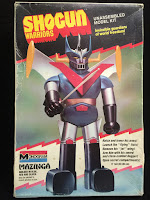 6021 Monogram Mazinga
Mazinga is molded in royal blue, red and silver, and a little painting makes a very cool kit. The original Japanese kit could be purchased as just the robot or it could be part of a deluxe setup with cranes and part of the HQ lab - quite cool and super detailed. 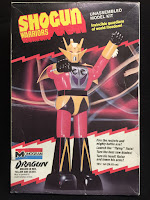 6020 Monogram Dragun
This is one of my favorite Shogun kits. He's molded in red, yellow and silver. When unpaited the colors are a bit odd but not as bad as the Grendizer kit's dark red! 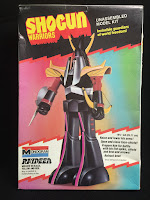 6022 Monogram Raydeen
Raydeen is molded in black, yellow and red. Two interesting features are his slide-apart face shields and his retractable bow. 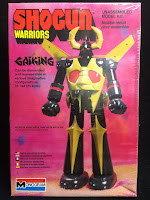 6024 Monogram Gaiking
A really cool kit molded in black and yellow, Gaiking can swing his arms and legs. This is one of my favorite kits as it looks quite like the anime portrayal. 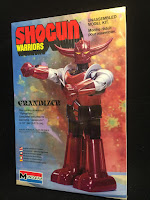 6025 Monogram Grandizer
One of the cooler kits, Grandizer is molded in black and burgundy, so some painting is required to achieve a semblance of the original figure. 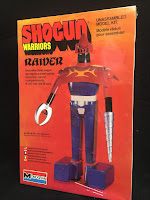 6023 Monogram Raider
The Raider kit was actually Getta Robo 2 repackaged under the Shogun title as Raider. The kit is molded in red and blue. 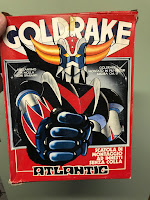 Atlantic Goldrake
Grandizer was shown in Europe as Goldorak or Goldrake and Atlantic of Italy released 4 kits for the series. The Goldrake kit is shown above. One of four Atlantic Goldrake kits, this 7" tall kit is the actual Grendizer robot and is molded in yellow, blue, red and grey. There was one other robot kit and two accessory kits that featured miniatures of the various anime characters - these kits were more toys than models, made from a softer, more resilient plastic than is typical of normal kits of styrene.


All Mattel images and captions are copyright Mattel, all Popy, Banpresto, Unifive or Yutaka images and captions are copyright Popy/Bandai and used without permission. Same goes for Marmit, Mandarake, Monogram or Atlantic and anyone else I missed. All other content, including images and editorial, is Copyright © 1997-2019 John Eaton and/or contributors unless otherwise stated. If there are any comments or objections, please contact John Eaton, by clicking here.
Share this: