Some Notes on Boxes 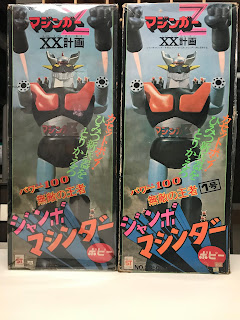 I've had a chance recently to look at box details and would like to share what I've found.

The Popy box lids (with the exception of the Robot Factory toys which were shipped in thinner boxes that opened on the ends) are all made the same way, with the end-flaps extended (generally printed with the same image that's covered by the sides or just printed black if that's the predominant end-color), glued to the sides so they'll still fold-down flat. Those diagonal creases you see on the sides are so that the boxes can be made/printed and stored flat until the toy is added. Some notes:

The initial release boxes have a yellow pigment added to the interior (presumably to the cardboard insert also). There are also some physical properties that are different:

In general all of the Mattel boxes are made consistently with with the later Popy boxes with a few exceptions:

That's all I have for now - need to add some additional photos for reference.

All Mattel images and captions are copyright Mattel, all Popy images and captions are copyright Popy/Bandai and used without permission. All other content, including images and editorial, is Copyright © 1997-2018 John Eaton and/or contributors unless otherwise stated. If there are any comments or objections, please contact John Eaton, by clicking here.
Labels: Collecting, Jumbo Machinders, Mattel, Popy, Popy Accesssories, Shogun Warriors
Share this: