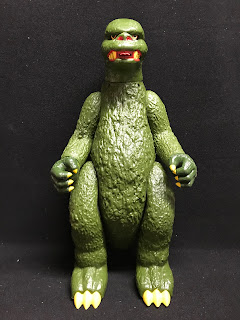 What's in a Fist?


When I first started collecting Shogun Warriors it quickly became apparent that there were different versions of the Godzilla figure - I first obtained a loose 2nd issue with a broken lever ($20 but he had his firing first and was otherwise in good shape - got him at a yard sale). Some time went past and I picked up a boxed 1st Issue at a toy show for $65 - the figure was basically minty and other than the color I didn't think too much about him being different - it wasn't until someone pointed out the plugs in the head and the "Made in Japan" on the feet that I realized that it was very different - the box was in decent shape but was a later "Made in US" version. I've had many discussions about this with Sean Linkenback who opined that the figure was probably switched (something easy to do with these as the packaging wasn't sealed) but I was skeptical - having messed with toys for years I knew that there were many running changes in toys that would create weird combinations as the changes were incorporated during the manufacture and packaging process. The further cement my doubt, I bought a second boxed Godzilla, this time from someone who had it since he was a child and once again, first issue figure in a 2nd issue box.

It wasn't until a few years ago that in talking to Sean that he mentioned that there was a box version with "20" Tall" instead of the usual "19 1/2" Tall" and that's when I spent more attention to Godzilla, first in finding the box variant and next in looking at all the differences between the two. Now that I have a box I realize that the first issue Godzilla was actually manufactured by Bandai in Japan - call it the actual first Bandai Godzilla, since it predates the toys Bandai distributed later and is actually marked (the Jumbozaurus was created by Popy and while a Bandai subsidiary, not marked "Bandai"). I managed to score a Canadian boxed version with "20" Tall" in dual language (English and French). This version also does NOT have the suffix printers' codes indicating a new art version (like the running changes on the other Shogun Warrior boxes) - my thought is that it's the true first issue and that it probably preceded the US 1st Issue 20" box by a few months. (I have a 20" variant box WITH printers codes as a US edition which I think was printed a short time later).

Comparing the boxes is fun but more so to compare the figures - besides the color differences the feet/toes are unusual as the Bandai version has both "Made in Japan" and has reinforcements so weights could be put into the legs - the US version lacks both those details. There's more definition to the 1st Issue Godzilla paint - looks like Bandai first sprayed an underlayment of white before applying color to really make the colors standout - the US foregoes that treatment. Finally, the lever on the Bandai version is made with a darker red plastic. At this point I only knew about the two versions and the "smooth pickle" which is only found in the earlier brighter plastic - this is a reference to the smooth tail which lacks the bumps for the fins - I believe that's the earlier version.

Which brings us to the discussion on fists - neither Sean nor I had ever seen the smaller shooting fist - I think I read about it online a few years ago but hadn't seen a photo until someone posted it. I acquired one last year - it's a smaller cast fist that has a straight thumb. I'm not sure why this was changed but maybe the thought was that it didn't look enough like a fist? It's an odd detail - I've only seen 2-3 of these thus far (and I've owned a couple of dozen and review photos all the time). I think it makes for a better match to his left fist - but maybe the point was to make it big enough that it won't shoot as far and won't hit with as much impact? Not sure why but there you go.


I've also provided some comparison shots of the Godzilla vs Jumbozaurus Gojira fists, just for reference.

I hope you've enjoyed this post - let me know if there are any comments or if I've missed anything. I've left off the other variation points as they're discussed on the regular Mattel Godzilla page.

All Mattel images and captions are copyright Mattel, all Popy images and captions are copyright Popy/Bandai and used without permission. All other content, including images and editorial, is Copyright © 1997-2019 John Eaton and/or contributors unless otherwise stated. If there are any comments or objections, please contact John Eaton, by clicking here.
Labels: Godzilla, Gojira, Jumbo Machinders, Jumbozaurus, Mattel, Popy, Variations
Share this: