1978 continues Mattel's Shogun Warriors toyline with the introduction of Godzilla and Gaiking to the Jumbo Machinder lineup. It's curious how much the US Godzilla differs from the original Popy Gojira Jumbosaurus - I thought it might be due to the size of the box as Mattel's version is vertical much like the Shogun Warriors boxes, however due to differences in size the box doesn't conform to the other Warriors so I'm not sure what they were trying to accomplish. The most egregious change was the removal of Godzilla's iconic back fins, replacing them with little bumps. Second to that was the shortening of the tail, third the removal of the chest speaker and pull-string "bark". At least Godzilla retains the "tongue" of flame and the shooting fist - it's this last item that makes it worthy of the Shogun Warrior name! 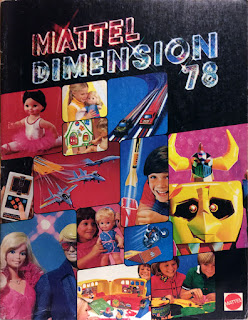 For the cover of the 1978 Mattel Catalog, we get the added treat of having the new Gaiking Jumbo Machinder on the cover! We are also treated to four glorious pages of Shogun Warriors, including new articulated action figures and vehicles! 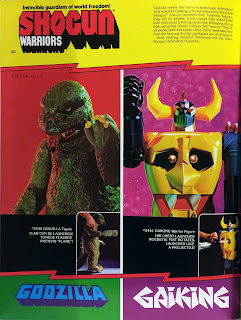 Page 48 shows Godzilla and Gaiking with images that were also used on the US retail boxes. The text above: "Godzilla meets the Samurai space age defenders! And now with Gaiking, a brand new warrior, the giant Shogun(R) line-up numbers five. Towering figures, they zip on wheels. Each comes fully assembled with individual action accessories. Weapons, flying fists, arms that "move," rockets that "launch"! They're all loaded with extra play value. None need batteries! And the famous 4-color packages are all stoppers ...bold, striking, colorful! These are the big ones, Shogun defenders of justice." 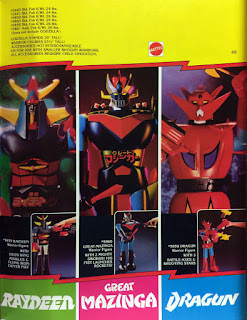 Page 49 shows the Shogun Warriors introduced in 1977 but note the change to Mazinga, now Great Mazinga (and the chest "v" has mutated into a rather lame decal - the travesty).

And at the top the list of Shogun Warrior paks (assortments):

My notes: One thing about this page - the image and name of Mazinga, now Great Mazinga indicates to me that the change-over to the redesign happened much earlier than I had originally assumed. This rewrites things a bit and it also explains why the Great Mazinga figure is so much more common. I really wonder what the rationale was in producing something that's clearly inferior? 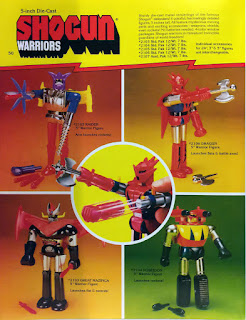 Page 50 introduces the US to chogokin for the first time with images of Raider (Liger), Dragun, Poseidon and Great Mazinga. There's an inset circle that shows Dragun's fist flying off his arm. I love that we get all three parts of Getter Robo G (even if they changed Liger's name) and there is the tie-in to the Starvengers cartoons.

Individual accessories for 24", 3" & 5" figures not interchangeable. 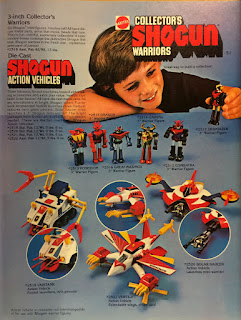 Each Vehicle image has an inset circle that shows the missile firing action. 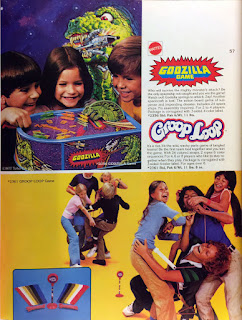 Godzilla Game
With the addition of Godzilla Mattel was able to market new toys, presumably with the Godzilla license garnered from Toho Co. Ltd. This interesting Godzilla Game is the result - while not part of the Shogun Warriors I think it may be of some interest and ties-in to the line. The image shows the Godzilla Game logo and a photo of three kids playing with it. I believe this is a creation unique to Mattel and not something repackaged from an existing Japanese toy. The description reads: "Who will survive the mighty monster's attack? Be the only spaceship not caught and you win the game! Watch out! Godzilla springs to attack. Zap! Another spacecraft is lost! The action board game of suspense and impending disaster. Includes 24 space ships. No assembly required. For 2-4 players. Package is corrugated with 3-sided 4-color label.