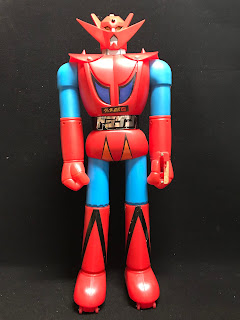 Getta Dragun is part of Go Nagai's second Getta series, Getta Robo G, the successor to Getter Robo. In the original series Getter Robo would reconfigure into three different robots by coming apart and recombining in specific configurations to combat whatever the menace was at the time. Each of the tree parts were piloted by a teenager - the series ends with the death of one of the teens, but continues in Getta Robo G. Getta Dragun is the land combat version that uses and axe to great effectiveness - the left fist has a throwing mechanism that allows for one of the included three axes to be spun through the air for some distance.


Most westerners are familiar with Dragun as he was included in Mattel's initial release of Shogun Warriors toys. The versions are nearly identical, at least in the beginning, with some running changes added - the Mattel Dragun also came with a "star shooter" accessory only provided as an add-on accessory in Japan. Dragun has also been knocked-off by two Spanish language companies, Nacoral in Spain and Famosa in Venezuela with some color differences (I've heard that Nacoral/Famosa actually licensed the figures but I'm not sure about that as their names weren't retained - for Dragun the primary differences are in the black cape and fists).


Note that the Popy Dragun lacks any copyright information on the back, different from the US Shogun Warriors release. Also note the axes are slightly different from the Mattel later release, with spikes on the head (some early Mattel axes use the same mold but this was simplified for most - most Mattel also have darker blue axes and not these light blue).

All Mattel images and captions are copyright Mattel, all Popy, Banpresto, Unifive or Yutaka images and captions are copyright Popy/Bandai and used without permission. Same goes for Marmit, Mandarake and anyone else I missed. All other content, including images and editorial, is Copyright © 1997-2019 John Eaton and/or contributors unless otherwise stated. If there are any comments or objections, please contact John Eaton, by clicking here.
Share this: