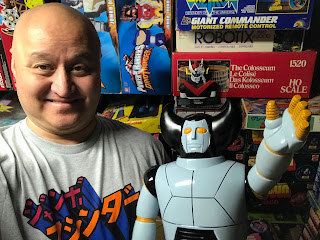 Mandarake is one of the newer entries into the jumbo machinder market. Mandarake is a manga,  anime and toy dealer who has about a dozen retail locations across Japan. Mandarake initially surprised the world by  producing the Kikaiju Gelbros J3 (aka Cerberus J3 from episode 32 of Mazinger Z) for the Daimansai festival in Japan.They have continued to produce several more Jumbo Machinder sized creations in vinyl, about one a year with a couple of limited color variations, usually in conjunction with the Daimansai festival held annually. They're calling this the "Non-Standard Collection Part #" - rather loosely (the Gelbros is just numbered "No. 1" and they didn't start giving Part numbers until King Joe as Part 3). The list thus far:

There are several color variations - mostly due to demand (for instance the Poseidon proved to be very popular so several color plastic versions have been released in waves - each time a base color plus a limited with smaller numbers - I see these for sale for about double the retail price but I'm not sure if they're actually selling for that amount - more likely it's dealers fishing for the most money and corresponding notoriety).

All Mattel images and captions are copyright Mattel, all Popy, Banpresto, Unifive or Yutaka images and captions are copyright Popy/Bandai and used without permission. Same goes for Marmit, Mandarake and anyone else I missed. All other content, including images and editorial, is Copyright © 1997-2019 John Eaton and/or contributors unless otherwise stated. If there are any comments or objections, please contact John Eaton, by clicking here.
Share this: