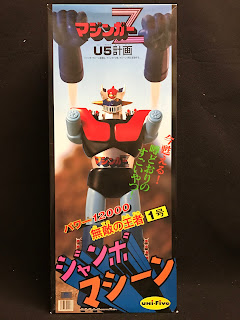 Unifive was an independent Japanese toy manufacturer focusing on the collector market - it's first foray into jumbo machinders was this recreation of the classic Popy Mazinger Z. I was eager to get this when it first appeared, paying the retail price (about $65 as memory serves) and ordering it through the Diamond Comic Distributors Previews catalog. I already had an original loose Popy so I left this one in the box, still wrapped. It's also the best of the several boxes I own. The box is done up in classic Popy style and indicates that Mazinger Z is #1 in a series (those who know the history of the Popy releases will recognize this as part of the No. 2850 release where the figures were numbered). There are also details on the sides for accessory fists just like the Popy issue but I believe only two were made?

The figure itself is a fairly close approximation to the original figure with some differences - I'll list these so you'll know when you see the Unifive as opposed to the Popy versions.The figures themselves appear to be the same at first glance, but side-by-side you can see the differences. Of course the most obvious way to tell are the differences of the copyright information on the backs - the Popy has Popy while the Unifive has Unifive, as you would expect. The general proportions are pretty much dead-on.

There's a general "roundedness" of the chest "Z"s that's more noticeable on the Unifive version on closer inspection.


There's also a more bulbous font used on the torso Mazinger Z name, along with the text being a bit smaller than the Popy version.

The most noticeable difference though is in the fists - for some reason U5 decided to go with the first issue Mazinger Z fist design, lacking the bumps of the original. And finally, the fists fit much more tightly to the figure than the Popy version. I've thought it odd that U5 would use the first issue fists yet cast the 2nd issue Popy feet (with the regular molded wheel trucks instead of the awkward wide clip-ons that the first issue Popy had).


The final difference (not shown) is that the wheels have ribbed tires - this was something carried on with Gaiking and Great Mazinger, as are the numbers on the boxes.