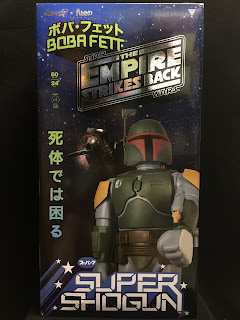 
I believe the Boba Fett, Empire Version was the second Super Shogun released by Super7. The Empire version has the paint scheme from the movie, as opposed to the Kenner Version which reflects the initial Kenner choices of color for the toy (the latter is sometimes called the hotdog or ketchup and mustard Boba due to the color of the arm cuffs). In any case, this is the first of the second of the Super7 Shoguns that I purchased and it's a massive, heavy toy. The sculpt is awesome, as you would expect from a company like Funko with great detailing. The box has Japanese writing on it to pull you back into the Popy era - there's even a Popy-esque logo in blue with Super7 in katakana.


The figure itself has limited articulation, much like the Shogun Warriors it's modeled after. The head turns and arms raise-and-lower. There's a rather fragile range-finder on the helmet that breaks rather easily (ask me how I know?) and rollers under the feet. There's also a missile firing gun mounted on the left arm that fires one of the accompanying two yellow missiles - for some reason there's missile banks that hold two missiles each on each leg but the figure only comes with two?

The massive box itself is a work of art with great iconography - the figure is numbered as #4 in the Super Shogun series. There's also a very well made outer shipping box that's also marked to help protect the precious cargo inside. In all this is a great addition to the Super Shogun line.