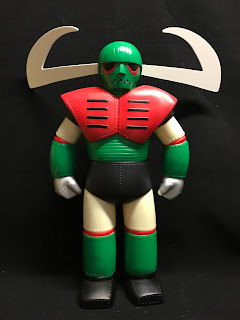 
After the initial release of Garada K7 in Japan and the sudden appearance of a photo of the actual toy with a green head, Unifive released this variant as an exclusive with Diamond Comics Distributors through their Previews catalog. I thought this was a fairly bold move after the first release received so much criticism from collectors, mostly for the size of the figure. Also, the JM market is a fairly small one - can this hobby sustain a color variant? Turns out the answer was "not really" - I'm not sure what the initial numbers were for the Previews version but these ended up being blown out by Previews - I purchased mine for $30. It's still the most common of the three versions.

Here are some comparisons of the two versions I own: