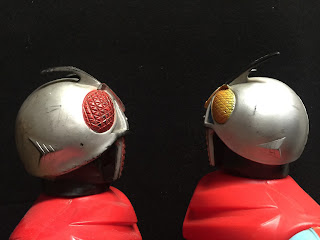 
There are many knockoff jumbo machinders - mostly of Popy but I have seen a knockoff of the Clover Dunbine jumbo so it seems that nothing is sacred, which you would expect for knockoff toys. I typically refrain from purchasing the knockoffs, unless it fills some hole in my collection or I've been duped into buying one - my Jugarama Aquaman was bid, won and purchased with the thought that it was some Popy Kamen Rider X variant and it wasn't until some time later that I learned it was a knockoff made in Mexico. In any case, I wanted to provide some information on those that I've seen and in particular those that I own.

Here's a list of those that I know about:

I'm fairly certain that Famosa and Nacoral are the same manufacturers only marketed under different regional names. Famosa seems to have been active in South America (Venezuela) while Nacoral marketed Spain. The figures, images and "checklist" on the end of the box are too similar to be coincidental - of course this may be a company knocking off another knockoff company - it's hard to confirm. I've also heard that Famosa and Nacoral both had licenses for their Jumbos but I'm not sure they would have changed the names if that were true.