Mazinga was one of the first three Shogun Warriors (Raideen, Mazinga and Dragun) released in the US in 1977. Both the Japanese Mazinger and Great Mazinger robots were controlled by a pilot who would fly his plane into a docking port that made up their craniums. The Mattel toy reflected this with a removable plane in the first two versions (called "Mazinga" on the box), and an un-removable one in the later versions (renamed "Great Mazinga" on the box). Mazinga came with two swords (even though he could only hold one), and a rocket firing fist (originally sold as a separate accessory in Japan).

The figure initially came with 14 rockets with rocket holders on his shoulders and legs. Later versions came with only 10. As with the other initial release Shogun Warriors, Mazinga underwent several running changes during its production: (As a note, each version's boxes usually reflected the interior toy's configuration, came with small cardboard inserts, instructions (rarely seen) and a Mattel warranty card). Here is a comparison of First, Second and Third Mattel US release figures.

Prior to the Mattel US release, Mazinga was released as Great Mazinger in Japan. I'm not quite sure how many running changes were made with this release - the example that I have is pretty much identical to the Mattel Mazinga release except the left fist is winged like the right fist - it's also a darker navy blue (almost black) like the Mattel First US release. Also on the back it doesn't have "Made in Japan" which seems to have been added to the export version. There's a very rare first Popy issue relase that has a different head - the points are taller and there are two sets of wing indents on each side. I believe the Jet Condor is also a little different from the second, more common issue.


The first release may be identified by several features: The head mold is much more defined and pointed with an unusual arrow shaped hole on top for the removable plane. The right, winged hand is molded in a navy blue while the firing hand has 4 screws holding it together as opposed to the second release with 3 screws  (the firing mechanism is made of two pieces with a metal spring). The chest "V" is a separate piece of red molded plastic, very pointed, and juts from the chest - on the first release the "V" is stepped instead of a consistent thickness. The wheel trucks on the bottom of this version's feet are molded on flat feet bottoms, as are the missile holders on the shoulder. The missiles have true triangular vanes (unlike the later versions which have clipped vanes...as a note, the triangular vaned rockets are also provided to Gaiking. The red shield decal on the knees is usually split as it straddles the upper and lower leg. This version comes with 14 rockets (the leg holders hold five each) and two swords.

The second release was basically a refinement of the first release. The head mold has more rounded corners and the hole for the removable plane is triangular. The right winged-fist is firing hand is now molded in lighter blue (hard to see the difference without comparing the first and second side-by-side) while the firing hand and has 3 screws (if opened, the firing mechanism for each rocket is made of a single piece of plastic with a metal spring). The chest "V" is larger and has heavier points and sharper corners (when looked at from above the "V" is a consistent thickness while the First US Release has a recess with stepped levels). The wheel trucks are now separate, held on with two screws along a protruding squared-chassis. The shoulder missile banks are separate pieces held with screws. The missiles usually have clipped vanes (however I recently purchased a 2nd Edition with full-vaned missiles so that variation exists) and the knee shields are now molded on the bottom half of the legs. This version comes with 14 clipped-vaned rockets (see note above). These changes were probably made during the initial release in 1977 as the 1978 version switched to Great Mazinga.

The box for both first and second release Mazinga: 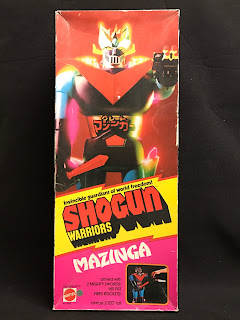 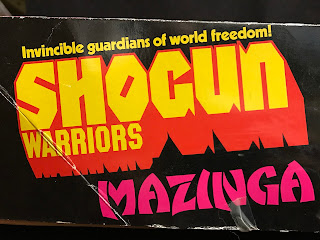 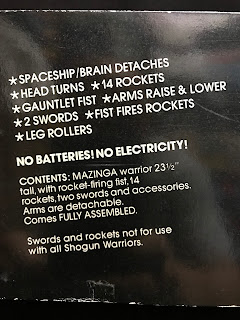 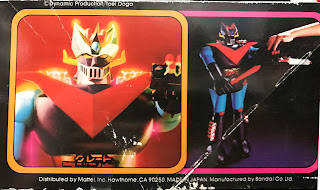 No Batteries! No Electricity!

For some reason a few Canadian-issue Mazingas have shown up with white missiles/red clipped vanes but these aren't just a reversal of the colors - the actual missiles are constructed differently with a molded backing piece to the vanes. I'm not quite sure why they were done like this, if you look at the box-art for Gaiking it also shows these missiles (which, if I'm not mistaken, were originally made for the Popy Dangard Ace jumbo machinder only reversed-out in color - red barrel with white vanes) - otherwise the box and contents appear to be the same as the Mattel US Second Issue. 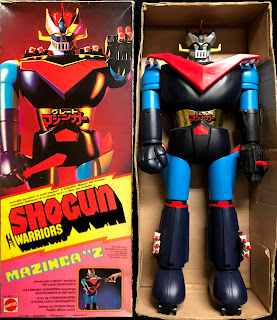 This other odd variant changes the name, I'm guessing to something more familiar to the European market. I've heard that reruns of a dubbed version of Mazinger Z was playing on TV so the name change may have been made to identify the toy with the TV show. Detailed photos on my example's own Mazinga Z page here.


All Mattel images and captions are copyright Mattel and used without permission. All other content, including images and editorial, is Copyright © 1997-2019 John Eaton and/or contributors unless otherwise stated. If there are any comments or objections, please contact John Eaton, by clicking here.
Share this: