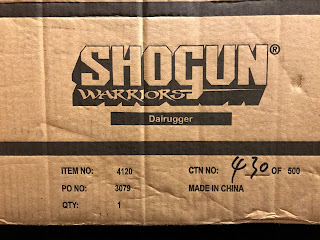 Tonami released two figures in 2011 - GoLion and Dairugger XV. While I found the GoLion interesting, I thought the Dairugger something really fantastic and worth getting, so I focused on finding one after the prototype was revealed at the 2010 Toy Fair. These originally retailed for $229.99 and at that price point, they were quite difficult to find - for this and GoLion Toynami wisely limited the production to 500 pieces (thus the higher price point) - each of the shipping boxes have a "CTN NO:" with X (handwritten) of 500 printed on the side. 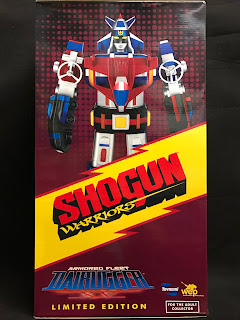 For folks in the US, Dairugger XV was introduced as "Voltron 1" or "Vehicle Voltron" - the idea in the show was that 15 vehicles would assembled into the robot. The US release (as part of the Voltron line) included several versions of the figure including one that could be assembled from 15 different Matchbox released vehicles - quite a cool toy - as a DX version. This is one Jumbo Machinder that everyone I think wanted and kudos to Toynami for making it a reality. At 24" tall it's slighter larger in scale than most Popy Jumbos, but this vinyl figure is quite handsome on the shelf displayed with the classics - it looks even better when positioned next to the Toynami GoLion (think of them as brothers). It does not have wheeled feet, but the later Popy's lacked wheels also so no big deal. I do wish that there was a shooting fist mechanism like the original DX - it would have been nice to have an extra set of fists that shot - but beggars can't be choosers. Also, the action is fairly limited (shoulders rotate the arms, some rotation of cuffs). 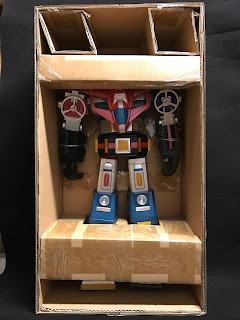 The only issue with this and the other Toynami figures is there's a bit of fragility to them - thus I've decided to keep this on in it's minty box - at some point I may look for one that's been displayed, just to have it out in my rotating JM display. I'm very happy with the box and overall design of this figure - it's quite heavy. For many photos of the actual figure