Some Notes on Fists

Some Notes on Color and Sculpts


Troy Varker asked me to help him do some color matching - he had custom created a Daimos right "Open Hand" and wanted to get the color right. I lined up a few of fists from the collection and chose the best color match. From Left-to-Right: Popy Great Mazinger; US Mattel Mazinga 2nd version; Popy Daimos; US Mattel Daimos.

Notes in no particular order

I've known for some time that the difference between the Popy right Great Mazinger fist and the US Mattel Mazinga 2nd version  fists use different sculpts and have differing color - the US fist is has a larger enclosed hand and is a lighter navy blue (the Popy fist is very dark blue, almost black). What I noticed today is that the wing is also different - the Popy version is has a longer point, extending out further than the Mattel.

Upon closer examination of the Mattel Daimos fists, it's fairly obvious that it was cast from the Mazinga fist - the mold marks and sculpt are exactly the same (same fist) however the Daimos fist loses a little detail where the pinky finger curls under so I don't believe they are based on the same master. More likely the Mazinga fist was used for the initial casting then modified with the plunger (so the fist could be fired) along with the ring for the Daimos cubic cuff. 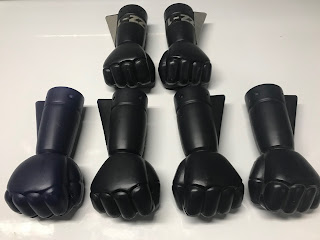 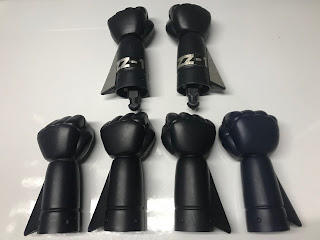 For some further analysis, is you compare the fists to those that come with the ZZ-1 Accessory (yes both fists exist - you only get one per set but if you buy enough you'll find the matching pair to each fist), you'll see that the sculpt is completely different. The fist part matches the Popy GM fists but the find is longer and a bit thicker.

John Olson asked me about one of the fists on a Mattel Dragun he owns - it's sculpted completely different from those I've pictured in various posts. Note that it's the US Mattel 2nd Version (larger firing mechanism with saw-blades):

Notice the short base for the firing part - it's cut even and squared with the wrist which is quite different from the earlier Popy version and later Mattel versions.


These are the three variants that I have:

The main differences that I've observed have more to do with the axe firing mechanism - the earlier version has an attachment plate one one side (the outside of the hand) while the later US Mattel version has a base that goes completely around the slit for the axe so it's in two pieces. I believe if the mechanism is removed it will be constructed a bite sturdier than the Popy version as most of the Mattel mods to shooters are an effort to improve the mechanics.


For the European Goldorak/Goldrake, the hands use a later mold so they are larger and a bit more bulbous than the original Grendizer. The Grendizer is also molded in slightly darker navy plastic and has an overall shorter length:


Anyway, that rounds things up for now. I hope you find this useful.

All Mattel images and captions are copyright Mattel, all Popy, Banpresto, Unifive or Yutaka images and captions are copyright Popy/Bandai and used without permission. All other content, including images and editorial, is Copyright © 1997-2018 John Eaton and/or contributors unless otherwise stated. If there are any comments or objections, please contact John Eaton, by clicking here.
Labels: Daimos, Great Mazinger, Jumbo Machinders, Mattel, Mazinga, Popy, Popy Accesssories
Share this: